Half a million crabs killed by plastic debris on remote islands In the first study of its kind, an IMAS-led research team estimates that around 570 000 hermit crabs have been killed on the Cocos (Keeling) Islands in the Indian Ocean and Henderson Island in the Pacific after being trapped in plastic debris.

Published in the Journal of Hazardous Materials, the study was carried out by researchers who previously revealed that Cocos and Henderson islands are littered with millions of pieces of plastic. (Image, right, Dr Lavers with Cocos Island hermit crabs in discarded plastic buckets. Credit: Silke Stuckenbrock)

The hermit crab study found that piles of plastic pollution on beaches create both a physical barrier and a series of potentially deadly traps for crabs.

IMAS’s Dr Jennifer Lavers, who led the studies, said that while considerable attention had been given to plastic pollution in the marine environment, little research had been done into the risk that marine pollution poses to wildlife.

“When we were surveying debris on the islands, I was struck by how many open plastic containers contained hermit crabs, both dead and alive,” Dr Lavers said.

“Our calculations show more than 500 000 hermit crabs died from being trapped in containers on the Cocos (Keeling) Islands and 60 000 on Henderson island.

“These results are shocking but perhaps not surprising, because beaches and the vegetation that fringes them are frequented by a wide range of wildlife. 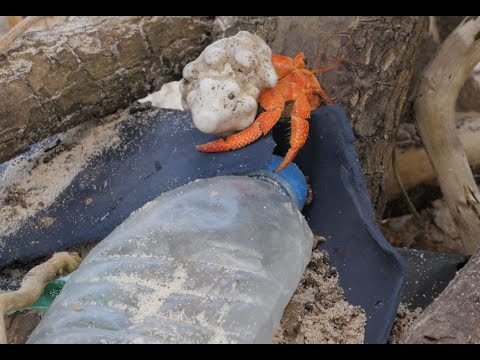 “It is inevitable that these creatures will interact with and be affected by plastic pollution, although ours is one of the first studies to provide quantitative data on such impacts.”

Dr Lavers said marine plastic is a problem worldwide and comparable hermit crab losses on a global scale would have important implications for ecosystems.

“High concentrations of debris are now being encountered on beaches around the world, many of which are also home to hermit crabs that can be expected to interact with plastic pollution in the same way as those we studied. (Image, right, Dr Lavers with Cocos Island plastic debris. Credit Silke Stuckenbrock)

“Hermit crabs play a crucial role in the health of tropical environments by aerating and fertilising soil, and dispersing seeds and removing detritus, as well being a key part of the marine ecosystem.

“Their population degradation is more than just a risk to the natural environment.

“They are also an important part of marine ecosystems that humans rely on for fishing, recreation and tourism, so ultimately the impacts may also be economic.

“Our study is the first to document the mortality of hermit crabs due to beach debris but the broader global picture remains unknown.

“However, it is likely that the mortality of hermit crabs across the world’s beaches is substantial, and further investigation is required to inform a broader understanding of the scale and implications of their loss,” Dr Lavers said.

The study also included researchers from the Two Hands Project and the UK’s Natural History Museum, and the plastic survey on the beaches of Cocos (Keeling) Islands was assisted by Sea Shepherd’s Marine Debris and the Tangaroa Blue Foundation.