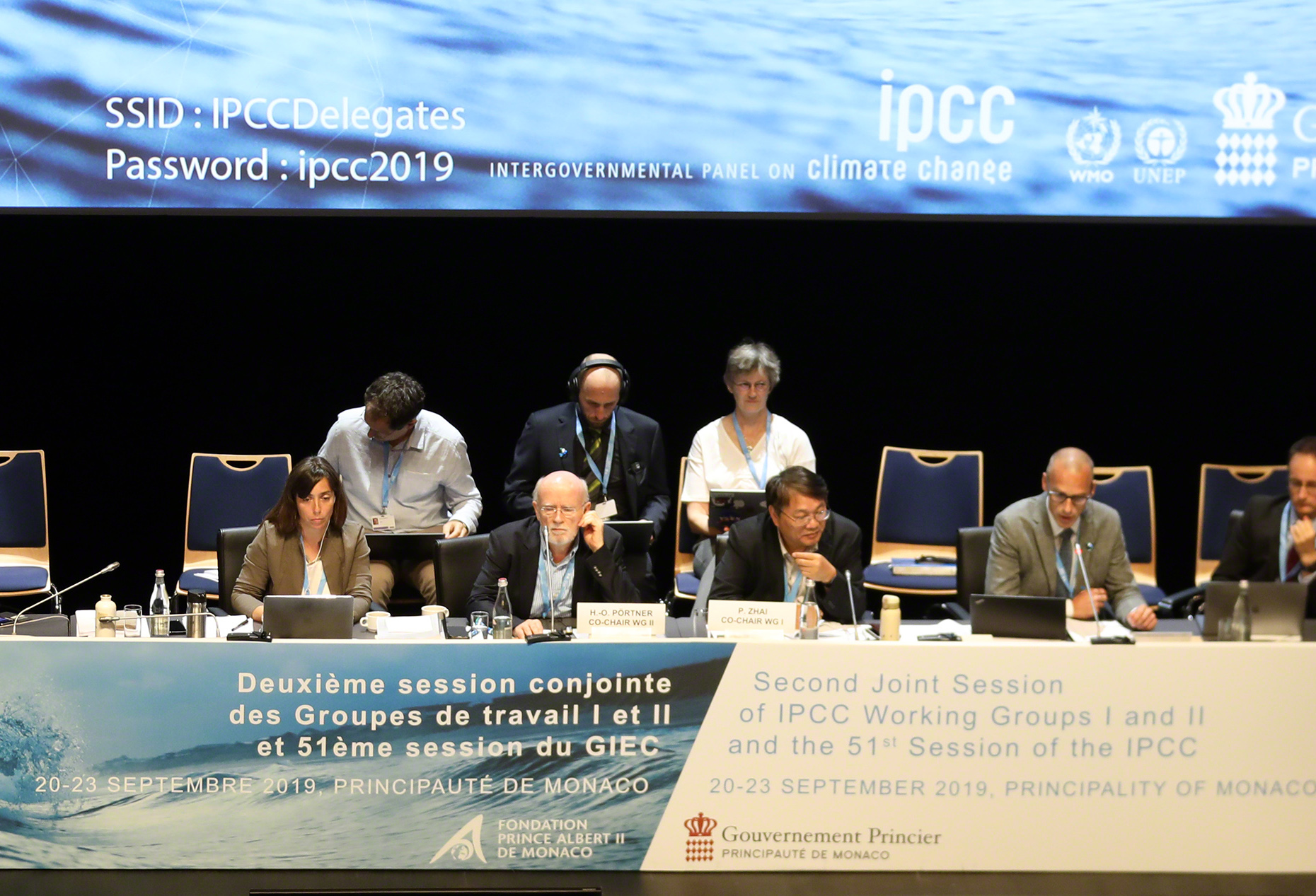 The IPCC approved and accepted Special Report on the Ocean and Cryosphere in a Changing Climate at its 51st Session held on 20 – 23 September 2019. The approved Summary for Policymakers (SPM) was presented at a press conference on 25 September 2019.

Professor Bindoff said the report is perhaps the most comprehensive assessment of the impacts of climate change caused by humans, around the oceans in particular but also high mountains and polar regions and on sea level and extreme events, that we’ve ever had.

"The assessed literature is about 7000 citations. It has over 100 authors and probably has contributions from the research community, in oceanography and sea level and land surface, from another 250 to 300 people," Professor Bindoff said. (Images: Prof Bindoff at the IPCC's 51st Session in Monaco.  All photos by IISD/ENB | Mike Muzurakis)

"It really has mobilised an extraordinary community of climate scientists to work on this report.

"I think the really key message from the report is that there are options and ways and means to respond to climate change but there are limits in adaptation and consequently choices to be made around the sorts of emission pathways that society might choose as well.

"It’s not just the physical oceanography that’s covered by this report. It’s also the impacts on ecosystems, impacts on the services that the environment provides humans in general and more generally for the wider community.

"These things, when you line them up and connect them, there’s a lot of evidence already that the climate system has impacted on those services.

"Just to talk very specifically about my chapter: my chapter was very much about the changing oceans and the narrative of that chapter is from thinking about the physical change that is caused by humans: how it drives ecosystems and the response of those ecosystems, and how those ecosystems which support us humans, what we call human services and ecosystem services, are affected. Finally the report finishes up on topics around governance.

"Marine heatwaves - which are a relatively new phenomenon in our understanding and thinking, although they’ve obviously existed before - they’ve clearly doubled since 1982 and amazingly the intensity of those heatwaves and the duration of those heatwaves is tending to increase as well. There’s some really nice examples of those heatwaves, which actually illustrated one of the underlying chapters, around the consequences for Tasmania - the 2015/16 spring drought and autumn flood, and also around the disease in oysters as well.  So these marine heatwaves are important.

"Something that’s really new in this report that exists in the research literature is that it’s very clear that there’s a coherent pattern of a change in oxygen concentration. Oxygen, of course, is what fish and life need to breathe. Below the light zone, deeper than 200 metres, there’s a distinct decrease in oxygen concentration. We think this is driven by the stratification of the ocean caused by ocean warming.

"Particularly relevant to Australia is the note in this report about how the Southern Ocean is sucking up heat. Since the 1970s it’s actually stored 35-43% of the total heat in the upper ocean, and that share has actually increased since 2005 through to the present. The other thing that’s kind of curious is how the deep ocean is warming and particularly the emergence of that strong signal in the Southern Ocean.

"The Antarctic and Greenland ice sheets, which are so far away from where most of us live, are having impacts, and an increasing impact, on the rise in sea level. In fact, those two components plus glaciers are now bigger than ocean thermal expansion," Professor Bindoff said.