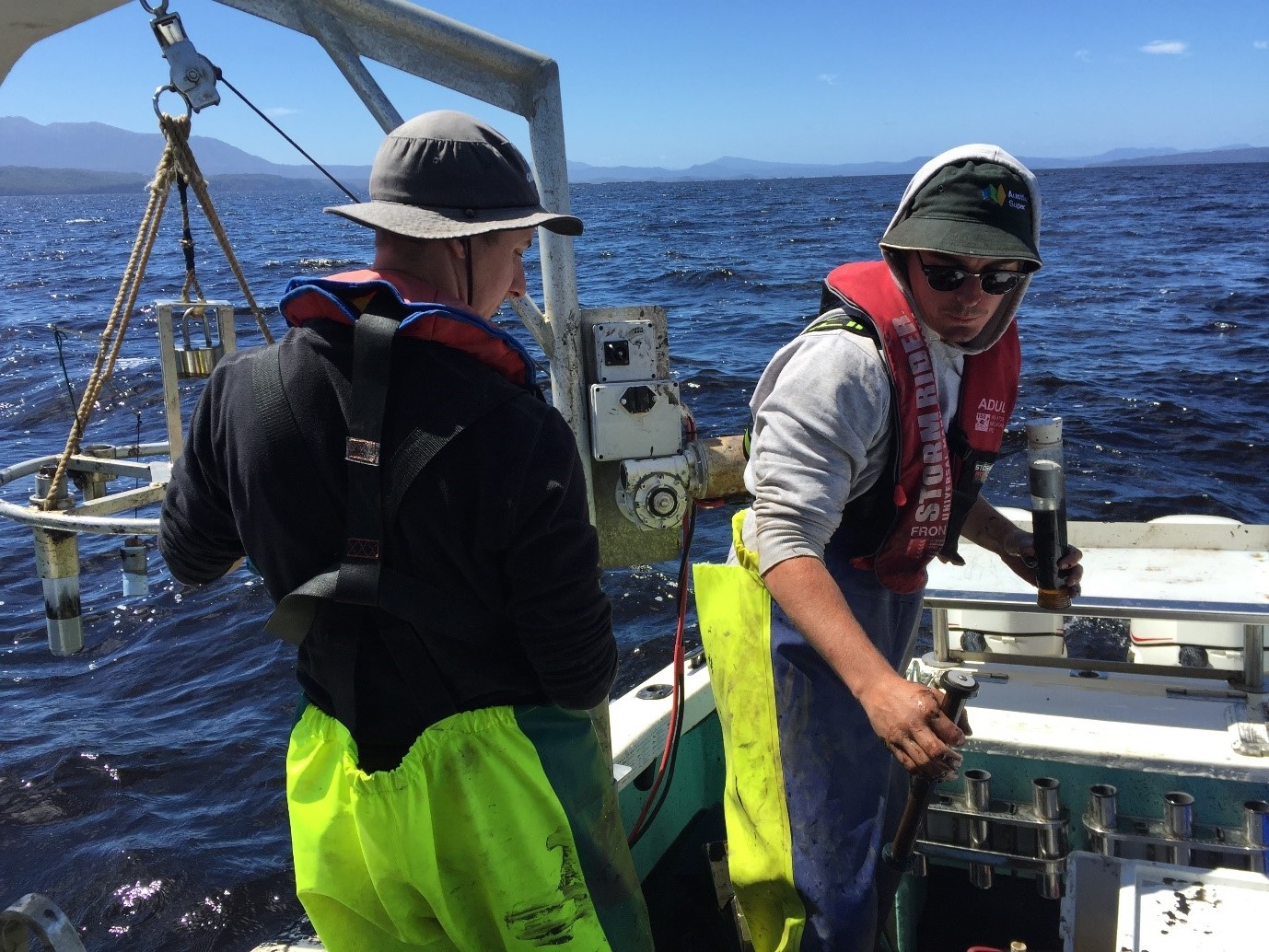 IMAS researchers today released the results of the latest survey of environmental conditions in Macquarie Harbour, carried out as part of a research project studying oxygen dynamics and conditions on the bottom of the harbour.

IMAS Research Fellow Dr Jeff Ross said regular updates are being provided on the project, which is designed to inform the long-term sustainable management of the harbour.

“Our January survey highlighted an improvement in bottom water oxygen conditions but little change in faunal communities in the sediments since the deterioration in spring 2016,” Dr Ross said.

“Our midyear survey has now documented some encouraging signs of faunal recovery.”

Dr Ross said the spread of the bacterial mat Beggiatoa around leases had retracted and oxygen conditions through the middle of the year have improved.

“However, while these observations are encouraging, oxygen levels in the middle of the water column remain very low and bottom waters are decreasing with the onset of spring, and so there is still the potential for dissolved oxygen levels to return to critically low levels.

“The next IMAS survey begins in October and this is the same time of year that oxygen levels reached critically low levels and the conditions of the sediments deteriorated in recent years.

“The results of the next survey will reveal how far the system has recovered since late last year,” Dr Ross said.

A key element of the project is the modelling of water movement and oxygen, led by the CSIRO’s Dr Karen Wild-Allen.

Dr Wild-Allen said the CSIRO model of Macquarie Harbour is simulating the movement of water in real time and providing forecasts three days in advance.

“Importantly, we are using the model to track oxygen in the harbour, which will help to unravel the drivers of the oxygen levels we are now observing,” Dr Wild-Allen said.

“Our results have already demonstrated the importance of oceanic water flowing in over the shallow and narrow entrance to the harbour in influencing oxygen levels in the bottom waters, and of the seasonal influence of weather and river conditions.

“The model suggest that oxygen replenishment of the bottom waters is more likely to occur when river flows are low,” Dr Wild-Allen said

The CSIRO model has also been used to understand the ‘age’ of different parts of the water column.

Dr Wild-Allen said it was clear that the water in the middle of the water column is resident in the system for the longest period of time and that this helps explain why this region is where the lowest levels of oxygen are often seen.

The project is funded by the Australian Government’s Fisheries Research and Development Corporation (FRDC), the Tasmanian Government, and aquaculture companies, and is due for completion in early 2018.

The latest report, together with those released in May and January, can be found here. The next update will be released in early 2018.