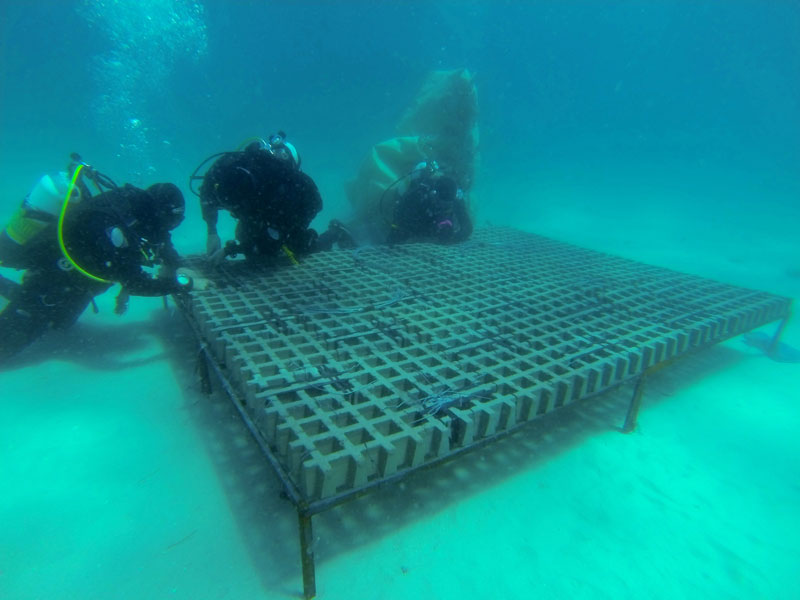 Scientists have transplanted hundreds of kelp plants to artificial patch reefs in an experiment to test the resilience and stability of the important common kelp on Tasmania's sheltered east coast.

Thinning of kelp and increased patchiness of kelp forests because of warming ocean temperatures and spreading of the invasive long-spined sea urchin are having significant impacts on the ecology of rocky reefs in eastern Australia, which are home to hundreds of species that use kelp forests as habitat.

The first stage of the experiment by University of Tasmania researchers at the Institute for Marine and Antarctic Studies (IMAS) was completed this week.

The array of artificial reefs covers over a hectare, and it is thought to be the first time an experiment with transplanted kelp of this size has been conducted anywhere in the world.

The common kelp, Ecklonia radiata, occurs throughout the cool waters of Australia and the underwater forests it creates support highly productive and biodiverse ecosystems, including species such as rock lobster and abalone.

Mr Layton said kelp forests are a central feature of the region's marine ecology, and familiar to divers, spearfishers, commercial and recreational fishers, and tourism operators.

"Understanding how kelp forests thrive and support themselves from one generation to the next is critical to protecting these invaluable marine ecosystems.

"Unfortunately, kelp forests are under threat from a range of pressures including coastal development, invasive species, and climate change.

"Our research is examining how kelp forests change their surrounding environment, and how these changes in turn benefit future generations of kelp," he said.

The work is supervised by Prof Craig Johnson, Head of the IMAS Ecology and Biodiversity Centre, and Dr Jeff Wright, also from IMAS. Prof Johnson said his research team will monitor the constructed kelp forest for the next 18 months and examine how different densities of adult kelp and different patch sizes influence how the kelp affects its environment and its capacity to flourish.

For example, as adult kelp sweep back and forth in the swell they remove the sediment and sand beneath them, helping keep the rocks clean and clear and in the process making it more suitable for settlement of small kelp spores.

Mr Layton said scientists also will be deploying devices to collect larvae, which will allow examination of how the size and density of kelp forests affect the number of fish and invertebrates, such as lobsters and urchins, that settle into these underwater forests.

"We hope that by understanding these essential features of kelp forests we can help to maintain them and the services they provide in response to future threats and continuing ocean warming, and also gain a better understanding about how changes to our kelp forests may flow-on to affect the other organisms which also call kelp forests home," Prof Johnson said.

Mr Layton said the research team is securing invaluable experience in the transplanting of kelp.  "In the future this may be a method used to restore and rejuvenate areas which have already suffered widespread kelp loss due to impacts such as marine heatwaves, increased nutrients, or invasive sea urchins," he said.

This research is supported by IMAS at the University of Tasmania, the Australian Research Council, and the Holsworth Wildlife Research Endowment.