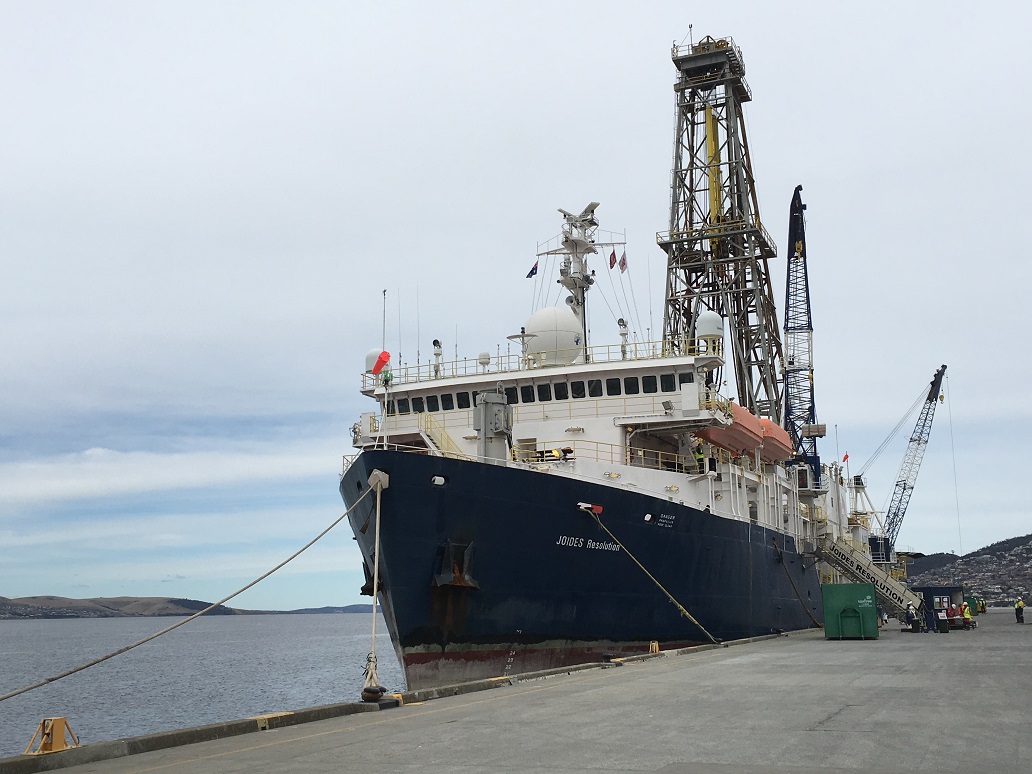 A team of 32 scientists from 12 countries has arrived in Hobart on the research vessel JOIDES Resolution after a nine-week voyage to study the lost and now submerged continent of Zealandia in the South Pacific.

The University of Tasmania is one of 16 Australasian universities who, along with CSIRO, Geoscience Australia, GNS Science and NIWA from New Zealand, participate in the International Ocean Discovery Program (IODP), which mounted the expedition to explore Zealandia.  Australian involvement in IODP is funded by the Australian Research Council and coordinated by the Australian National University (ANU).

Earlier this year Zealandia was confirmed as Earth's seventh continent but little is known about it because most is submerged more than a kilometre beneath the ocean and the region has been sparsely surveyed and sampled.

The expedition drilled deep into the seabed at six sites at water depths between 1250 and 4850 metres, collecting around 2500 metres of sediment cores from layers that record how the geography, volcanism, and climate of Zealandia changed during the last 70 million years.

Co-Chief Scientist Professor Gerald Dickens, from Rice University in the United States, said significant new fossil discoveries were made that prove Zealandia was not always as deep beneath the waves as it is now.

“The discovery of microscopic shells of organisms that lived in warm shallow seas, and spores and pollen from land plants, reveal that the geography and climate of Zealandia was dramatically different in the past.

“The new discoveries reveal that the formation of the 'Pacific Ring of Fire' about 40 to 50 million years ago caused dramatic changes in ocean depth, volcanic activity, and buckled up the seabed of Zealandia,” Professor Dickens said.

Co-Chief Scientist Professor Rupert Sutherland (Pictured, above, speaking to media in Hobart), from Victoria University of Wellington in New Zealand, said it was previously thought that Zealandia was submerged when it separated from Australia and Antarctica about 80 million years ago.

“That is still probably true, but it is now clear that dramatic later events shaped the continent we explored on this voyage,” Professor Sutherland said.

“The discovery of big geographic changes across northern Zealandia, which is about the same size as India, has big implications for understanding big scientific questions, such as how did plants and animals disperse and evolve in the South Pacific?

“The discovery of past land and shallow seas now provides an explanation: there were pathways for animals and plants to move along,” Professor Sutherland said.

"This IODP expedition has offered insights into Earth's history, ranging from mountain-building in New Zealand, to the shifting movements of Earth's tectonic plates, to changes in ocean circulation and global climate."

Future study of the sediment cores will focus on understanding how Earth's tectonic plates move and how the climate system works, with records of Zealandia’s climate history expected to provide a sensitive test for computer models used to predict future climate change.

The JOIDES Resolution will conduct additional expeditions around New Zealand, Australia, and Antarctica during 2017-2018, with IMAS PhD student Alessandro Maritati joining the ship for the next leg of the voyage.