Six weeks in an icebound boat 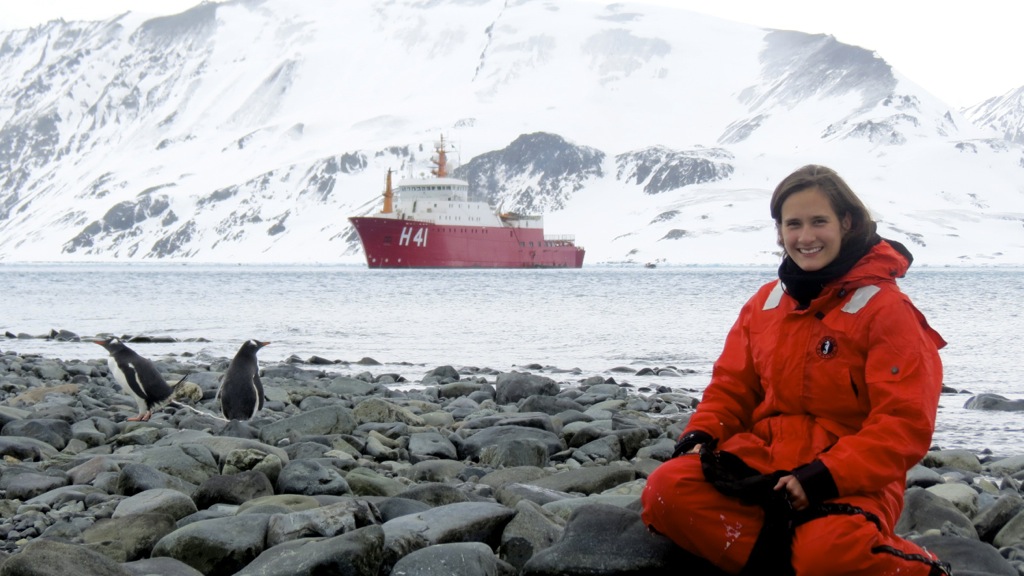 Two IMAS PhD candidates are among just 20 students from around the world selected to take part in a unique educational experience – on board a ship frozen into the Arctic ice. (You can follow the voyage here)

Lisa Craw and Natalia Ribeiro will spend six weeks in September and October on board the Russian icebreaker RV Akademik Fedorov for MOSAiC School 2019, part of a year-long expedition that will see Germany’s RV Polarstern locked in the ice as scientists measure climate processes.

The Multidisciplinary Observatory for the Study of Arctic Climate (MOSAiC) is the brainchild of a group of leading polar research organisations that hope to enhance understanding of the regional and global consequences of Arctic climate change and sea-ice loss, and to improve weather and climate predictions.

As RV Polarstern drifts in the ice, measurements will be taken of sea-ice extent, atmospheric composition, local biomass, temperature and salinity of the surrounding ocean water.

The data collected will be used by hundreds of polar scientists from around the world.

“I'll be working with sea ice coring and analysis,” she said, “but instead of focusing on just one research area we will really be looking at how our little areas of research interact with one another and fit into the broader scale of climate science - nothing happens in isolation!

Ms Ribeiro (Pictured, above right and below) said she was grateful for the opportunity to take part in the six-week program.

“As a physical oceanographer with a strong background in polar science, there is no place I would rather be for a summer school,” she said.

“We have some dry days in Tromsø, where we’ll do a Polar Safety Course and take part in some team building activities, before the cruise leaves Tromsø for the expedition’s starting point in the central Arctic.

“Once we arrive the scientific activities will involve setting up and testing buoys, helicopter surveys and deployments of these buoys, ice work next to the vessel and sea ice observations.

“There are different research teams (ocean, sea-ice, atmosphere, bio-geochemistry and ecosystem) and I was placed in the "Ocean Team", where I’ll be working on buoys.

“On the way back, we will have more lectures, including workshops on media and outreach, education and communication, and indigenous knowledge.

“We will also develop a "MOSAiC communication product" as an outcome to support the MOSAiC ambassador role that we’ll take on once our participation in the expedition ends,” she said.

After 350 days frozen in the ice RV Polarstern will return to port in September 2020.

Blogs from the RV Akademik Fedorov

We have finished all the work we were supposed to do on this first leg of MOSAiC and moving towards the ice edge where they will give us an estimate on when we will be arriving in Tromso. We sailed through some thick ice yesterday as well, which delayed us quite a bit... but we are crushing it now. (Photo: Matthew Shupe)

Apparently we need to detour to take the helicopters within range to Murmansk and there is a storm that might catch us in the Barents Sea. We are expecting to get to Tromso around the 27th/28th of October.

Firstly, why are we here? Natalia and I both study the Antarctic, which is literally poles apart from the Arctic... but ice here is melting rapidly, much faster than in the Antarctic, something that we call "Arctic amplification".

So right now we're looking right at the future of the Antarctic, all of the warming effects that are yet to arrive but are waiting in the future. We're right at the centre of climate change! (Photos: Stefan Hendricks)

The Arctic is very different from the Antarctic because there is no land here, it's all just ice up to a few metres thick floating on the ocean. Some of that ice is permanent, staying put right through the warmer summer months, but more and more of it is forming in winter and disappearing again in the spring. So everything is sort of transient; you can't really have permanent research stations making measurements year-round. However, that presents unique opportunities, like this expedition.

The icebreaker Polarstern, along with all of the instruments we are setting up, is frozen in and drifting with the ice right across the Arctic Ocean, collecting data the whole way. We have some drift predictions, but nobody can say for sure where it will end up.

We are among 20 postgraduate students in polar sciences on board the RV Akademik Fedorov, a Russian icebreaker accompanying the Polarstern on the first leg of its voyage, to learn from the scientists on board, help out with fieldwork, and work on outreach projects to educate the public about polar science.

One of the main tasks of the Akademik Fedorov is to set up the Distributed Network, a series of sites surrounding the Polarstern equipped with instruments to measure the state of the atmosphere, ice and ocean. We have both spent time out in the field, standing on ice as thin as thirty centimetres, drilling holes and installing buoys to measure ocean temperature and salinity. Temperatures can be as low as -20C, cold enough that our eyelashes freeze together, and we're so far north that the sun never comes above the horizon!

This expedition is totally unique, because it combines so many different disciplines. The Arctic climate is influenced by so many factors, from the ocean to the ice, to the atmosphere, to the surrounding ecosystem... Everything is connected, so it makes sense to study all of those different factors at the same time. We can't wait to bring everything we've learned back to Hobart, and start trying to communicate this awesome science!

Greetings from the middle of the Arctic ocean inside this great Russian vessel, RV Akademik Fedorov.

We are having a great time around here… the days finding the perfect floe to park the Polarstern are over and now we are finishing cargo transfer and looking for the perfect locations to set up the Distributed Network.

The DN is our main mission and constitutes of oceanography, atmospheric and biogeochemical instruments that will be set up around the Polarstern (approx. 20km radius) and, ideally, drift with it through the Transpolar Drift. (Photo, above: Esther Horvath)

Polarstern has found a promising floe! And they are calling it the Castle. Do they have a pool room in this ice floe? Maybe. It was a bit by chance, but they found a site within a floe up to four metres thick in some places, a little ridge or fortress, where it will be safe to leave the ship and, most importantly, leave the heavy equipment on ice. (Photo, right: Markus Rex)

Essentially that meant we could meet them, transfer fuel, cargo and people and finally start the set up of the Distributed Network. It unfortunately also means we need to start searching for appropriate sites for our set up. Three Large sites (L-sites; deployed from ship) and eight Medium sites (M-sites; deployed by helicopter) and P-sites (GPS drops by helicopter). The ice team work continues…

Polarstern was a bit more South than us and said the sites they were looking at were looking better. The funny thing is that one of them was the floe we’ve crushed to pieces on the 28th… which was quite funny.

And, finally, the day has come: this Russian baby hit some real ice. And she is cruising through it like it is nothing. Most of the seasoned Arctic scientists that are present in this voyage are slightly disappointed and I’ll take some of your time to explain why, using this mission as a context.

The whole point of the first leg of MOSAiC is finding a decently sized ice floe and mooring the Polarstern into it. Polarstern will then be carried away with it, drifting through the Arctic for over a year.  Around the Polarstern, a Distributed Network of equipments will be installed and that’s where we come in with RV Akademik Federov. (Photos, left & below left: Stefan Hendricks. Below right: Esther Horvath)

We will be deploying atmo/sea-ice/oceanographic equipments in large, medium and small sized cells over this floe to support the Polastern measurements. Unfortunately, to do that in safety and to make sure equipments won’t be lost, sea-ice thickness must be at least over 0.7m for the Distributed Network and over 3m for the Polarstern, as we need to leave some heavy equipment for them on the ice.

Potential sites have been monitored by satellite images and we just sailed through our first one and got very disappointed. Although being finally cruising through real ice is very pretty and exciting, it is breaking quite easily for it isn’t really thick. Some can get up to a meter, but most of the ice is about 0.5m.

Currently, we are in course to the middle of three other potential sites. Helicopters will be flying out in the morning, taking scientists to evaluate them and to take samples. Fingers crossed!

Hitting real ice though was majestic. Honestly, I do not have the proper words for what I felt. Lisa and I were sitting at the highest deck, starboard side (right) looking straight down to the enormous pieces being fractured against the hull. In all directions, everything was solid white. Like nothing I have ever seen before!

It is extremely warm in here and, although I thought I packed pretty smart, it could have been even less clothing. The Russians are extremely effective in insulation. Tasmania could learn a thing or two in that department! Foodwise they have this amazing system on the ship where you basically have an extra full meal at afternoon tea.

We have no gym and it is really hard to get some exercise done, which has definitely been my biggest challenge this trip. One of our colleagues runs crossfit sessions on the deck and we also have morning yoga sometimes to try to cope with the lack of exercise. I also spend a lot of my free time on deck gazing at the ocean or sea-ice looking for things, reading books or just standing there.

The first week of the cruise has passed and a lot has happened. We hit ice for the first time on the night of September 26th and it was beautiful and exciting. Yesterday, the bridge spotted two adult polar bears and a cub. (Photo, right: Mario Hoppmann)

We are currently crossing a field of relatively thin ice and then we will wait for the Polarstern in the open ocean and start moving in together looking for a suitable site to park it and establish the Distributed Network.

Every time I am on a boat, I remember why I decided to be an oceanographer. I absolutely love the feeling of staring out at the ocean… for hours. I have spotted seagulls, dolphins and even bioluminescent algae at the ship's stern. Still on the look out for whales, polar bears and the Aurora Borealis.

I can’t help it but to feel a bit sad for missing the flowers blooming in Hobart. I love it so much.