“The idea for the Tuna Champions arose while I was working closely with recreational anglers on a post-release survival project on Southern Bluefin Tuna (SBT). I recognised that this research presented an opportunity to reduce unnecessary wastage and mortality in the SBT fishery,” Associate Professor Sean Tracey said.

The innovative IMAS post-release survival project, one of the largest of its kind in the world using state of the art satellite tagging technology, was primarily designed to assess post-release survival of recreationally-caught SBT, assess physiological stress as a result of factors during capture, and ultimately test whether an increase in stress led to mortality.

“We found, if handled carefully, SBT are generally robust to recreational capture and release, but that using treble hooks causes far more damage to the fish and leads to higher mortality,” Assoc Prof Tracey said.

“From these results, recreational anglers know that, if they handle the fish appropriately and use correct gear, released fish have a high chance of survival when released. The results also give fisheries managers the confidence that fish released beyond possession limits have a high chance of survival, which validates the efficacy of this management tool for the species.” 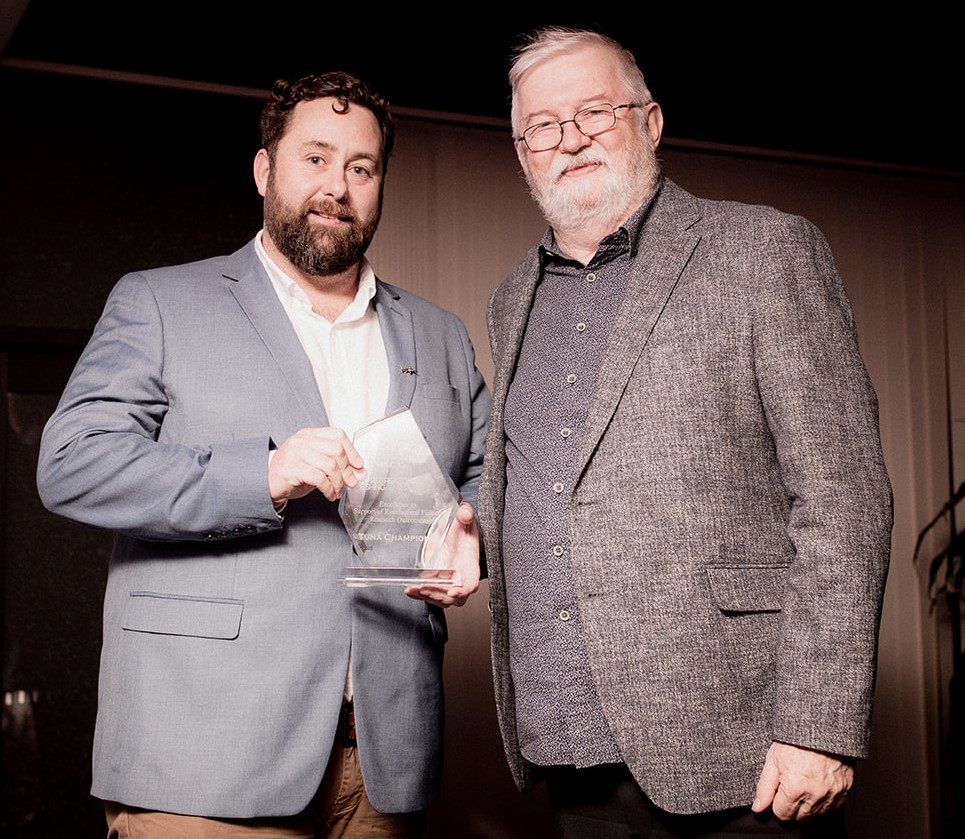 Inspiring change in the fishing community

The Tuna Champion project is an outcome of this research and was launched with the primary aim of creating a communication approach to inspire behavioural change in the recreational fishing community.

“The clear focus of this project has been to nudge fishers through education, to create a snowball effect of positive change from within the fishery itself. Our vision is for a ‘new normal’ to evolve, where using best-practice fishing methods is ‘just the way we do it now’,” Assoc Prof Tracey said.

“It’s not about telling people they should or shouldn’t retain fish within the legal requirements of the state where they’re fishing, but that they can choose to learn the best methods to maximise flesh quality if they plan to keep the fish, or the safest way to release a fish so it has a high chance of surviving,” he said.

Sean believes real benefits can come from targeted extension programs like this. “Through the Tuna Champions, anglers can access science-based knowledge about this iconic species and learn how to make the most of every fish. So, if best-practice fishing becomes the norm and anglers only take the fish they really need, there'll be less wastage and unnecessary mortality.”

Since it began in mid-2018, this ambitious project has engaged with anglers in an education program built around catching, handling, releasing, keeping and preparing SBT. This includes having a recognised brand, an information hub at tunachampions.com.au, a video series, waterproof information cards for boats, co-branded apparel, and a growing social media community.

“The key to the project’s success are our Tuna Champion Ambassadors who are high-profile fishing, sporting, science and culinary social influencers,” Assoc Prof Tracey said.

“It’s great to hear the Tuna Champions project being referred to as ‘a movement’, and to see it gaining traction in the game fishing scene. This includes game fishing tournament organisers implementing competition rule-changes based on the program’s key messages, and tackle stores using Tuna Champion Approved stickers to brand the right gear for SBT fishing.”

Funded by the Australian Government through the FRDC, the project has built effective partnerships with recreational stakeholder bodies and grassroots recreational anglers.

“While it is created by a research institute, the Tuna Champions program is designed for seamless transition to the Australian Recreational Fishing Foundation for ongoing delivery at the end of the project,” Assoc Prof Tracey said.

Image (above left): Sean is presented with the award by fisheries scientist Julian Pepperell, who is
well-known for his work in developing the Australian Gamefish Tagging Program.