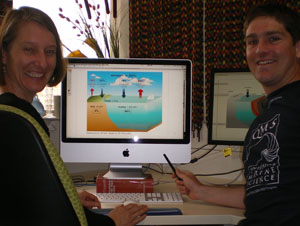 "As humans, we're adaptable to temperature - we can take a jumper off when it gets warmer - but we're more sensitive to changing terrestrial water supplies. Changes to these water supplies, due to climate change, potentially pose a more significant risk than temperature changes alone."
- Paul Durack.

Paul Durack is a surfer originally from Perth (Western Australia). His passion for the waves and the weather which drives swell creation naturally guided him to oceanography. He moved to Hobart in 2006, after working at the CSIRO labs in Melbourne for 3 years to pursue studies with the Quantitative Marine Science CSIRO/UTas PhD program.

Paul's project centres on a study of the Earth's hydrological cycle. This is undertaken by analysing fifty years of observed ocean salinity data. This project is of particular interest to climate modellers, in fact, the research community currently uses these complex climate models to predict changes to water supplies due to global warming.

"The models already integrate the atmospheric part of the hydrological cycle (rainfall, etc.) and compare to observations reasonably well. However we previously haven't had a good estimate of long-term ocean salinity changes, so haven't been able to quantify and validate oceanic changes in these models. The oceans represent 96% of the global fresh water reservoir and therefore are the major component of the global hydrological cycle. Additionally, the ocean's cover a whopping 70% of the Earth's surface area. The problem here is that we don't have data for rainfall over the oceans. If we did, we'd have a much better idea of how the global climate has changed over time."

"Ocean salinity and global ocean changes are strongly linked to precipitation and ocean-atmosphere temperature transfers over the ocean surface. Researching ocean salinity changes over a long period of time is a novel way to estimate global hydrological cycle changes over time."

"Current climate model best-estimates capture around a third of the observed changes in the ocean arm of the global hydrological cycle over the last 50-years. This model underestimation is a cause for concern, and may indicate that projections of changes into the 21st century are on the low side of what we're going to be seeing in the real, climate-changed world!"

Paul is passionate about his project. He says that his ultimate goal is to convey these results to decision-makers so that they can choose the appropriate policy paths for the global community.

Paul says that being part of both the CSIRO and UTas is ideal. He came to Hobart in preference to other PhD Programs in Australia to study within the QMS program. For Paul, this program provided him with the best opportunity currently available in Australia for oceanography and climate change research.

"I like the idea of the United States postgraduate programmes where you need to complete coursework and attain a certain level of competence before you start your research project." The QMS program is the only program in Australia that provides enrolled students with such relevant coursework to better prepare them for a scientific research life after postgraduate studies.

Paul will finish his PhD next year and will keep working on developing better estimates of ocean changes: "I'd like to think that my research is contributing to our understanding of changes to the global climate system, and will inform global climate change policy decisions into the future!"

Webmail
Authorised by the Executive Director, Institute for Marine and Antarctic Studies
© University of Tasmania, Australia