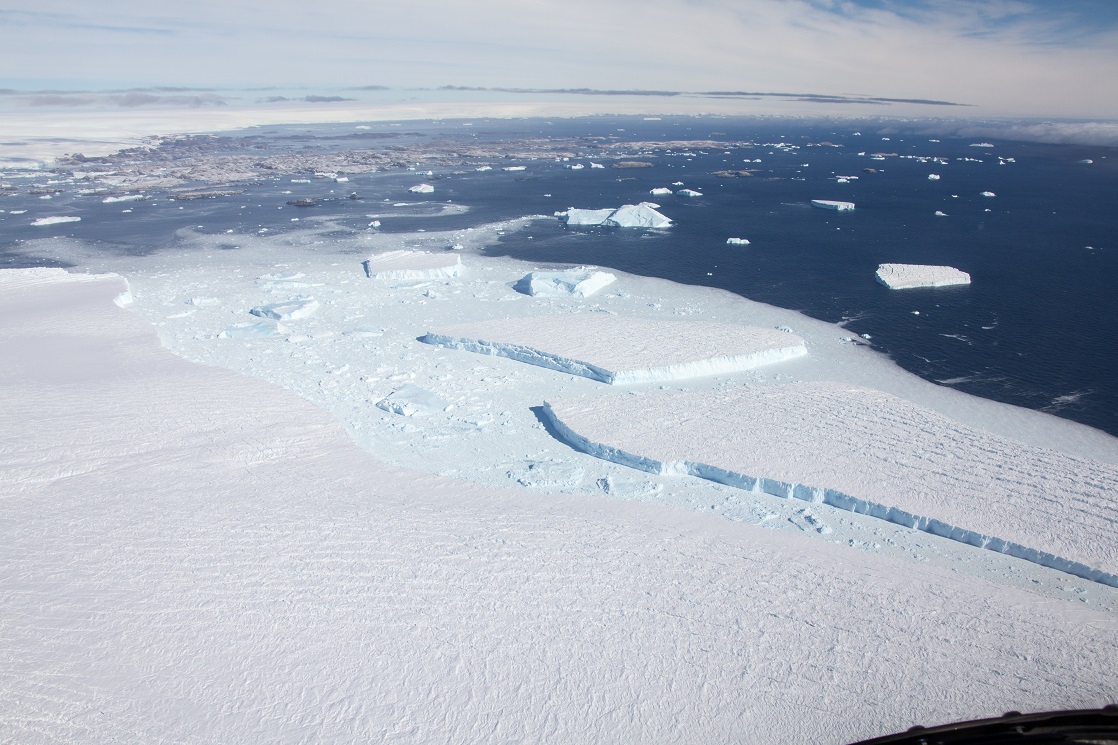 Antarctic researchers from the University of Tasmania this month enjoyed a front row seat as a segment of the Sørsdal Glacier ice shelf - six kilometres long and up to a kilometre wide - broke off into the Southern Ocean.

Known as calving, the event was monitored by researchers from the Australian Research Council funded Antarctic Gateway Partnership (AGP), who were in the East Antarctic area for test deployments of the University’s world-leading polar Autonomous Underwater Vehicle (AUV), built by International Submarine Engineering and named nupiri muka.

nupiri muka had explored underneath the ice shelf before the calving, which was a first for Australian Antarctic research.

AGP marine glaciologist Dr David Gwyther, who witnessed the event, said the observation of the calving was significant for research into the impact of Antarctic ice mass loss on sea-level rise. (Image, below: the widening crack on the southern edge of the glacier as it calves. Credit: David Gwyther) 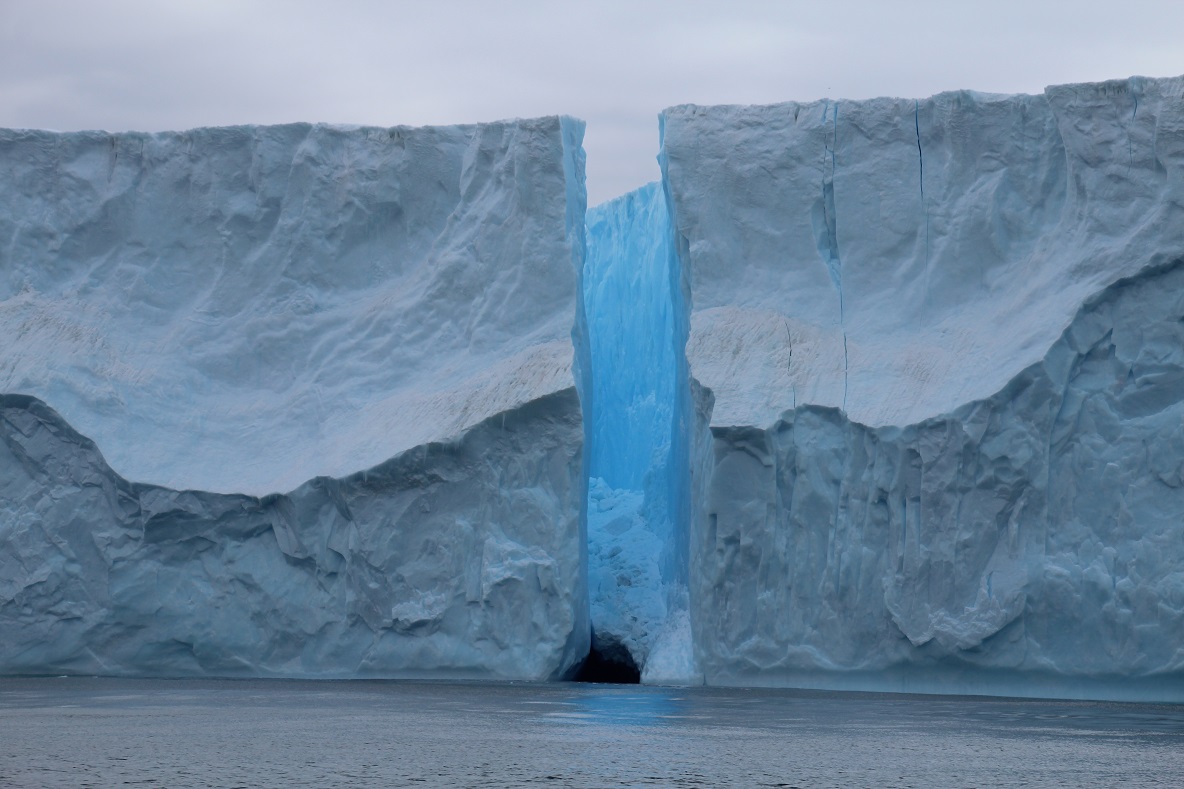 “This event was unique because we were able to use the AUV to map the under-ice environment before the calving event,” Dr Gwyther said.

“We were also able to extensively document the ice shelf region pre- and post-calving with both aerial and on-water photography, and to correlate the images with satellite imagery.

“While this particular event was not large compared to other recent ice shelf calving in West Antarctica, the detailed observations we’ve collected on this calving event will help us to better understand future changes to ice shelves.

“Ice shelf calving itself is a natural phenomenon, however the frequency of these events is predicted to increase with

“As such, this event will provide an invaluable baseline against which we can assess future changes,” Dr Gwyther said.

Back in Hobart, IMAS PhD student Eleri Evans had been using satellite images to monitor a trough at the tip of the Sørsdal Glacier ice shelf since December last year as it appeared a likely site for a calving event. (Landsat satellite image, right, shows a crack parallel with the left edge of the ice shelf prior to calving. Credit: Eleri Evans)

“The data from the photographic images taken at the site will be critical to improving our understanding of how the Sørsdal Glacier produces icebergs,” Ms Evans said.

“It’s uncommon for this level of observation to be made of an Antarctic calving event.

“In Greenland, videos of calving are commonplace because the mechanisms are different and icebergs may break off multiple times a day from the outlet glaciers there.

“But in Antarctica different mechanisms are involved, reducing the production of the larger tabular-style icebergs, and the remoteness of these ice shelves means there are very few cases where this level of observation has been possible. 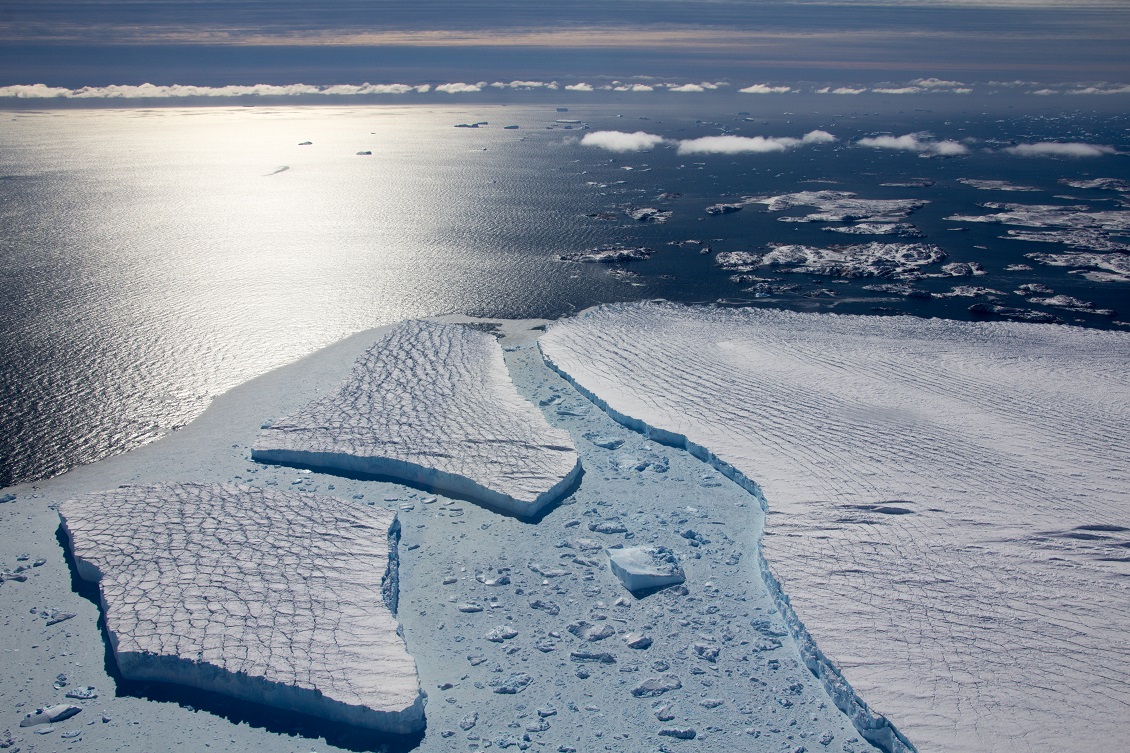 “It was just perfect timing that the researchers were there to capture the lead up to the calving event as well as its aftermath,” Ms Evans said. (Image, left: flat topped icebergs created by the calving. Credit: David Gwyther).

“The ease of access of the Sørsdal from the Australian Antarctic Division’s Davis research station provided a valuable test bed for nupiri muka’s first polar missions, in particular its first time beneath an ice shelf.

“nupiri muka collects a range of data that allows scientists to map the seafloor and under-ice topography while at the same time recording water temperature, salinity and currents, exploring the oceanography driving ice sheet change.

“This campaign has successfully demonstrated the unique capabilities that nupiri muka provides and provided an important proving ground for the methodologies that will drive many years of future scientific AUV exploration,” Associate Professor Williams said. (Image, below, the AUV team at Davis research station) 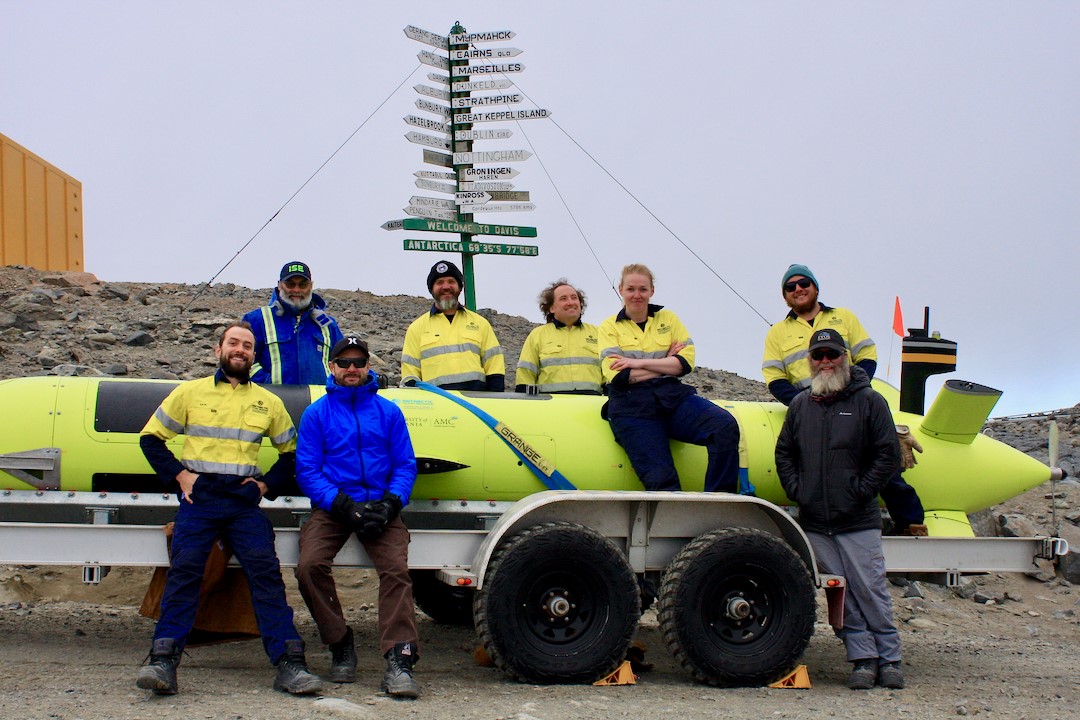