An IMAS-led international research team is the first to document bubbles rising from the seafloor around Australia’s remote sub-Antarctic Heard and McDonald Islands (Pictured, right). 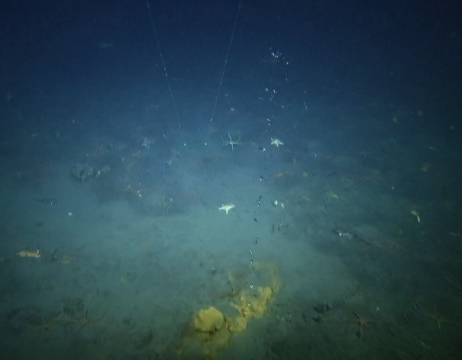 The bubbles were observed by scientists during a voyage in 2016 on Australia’s Marine National Facility, the research vessel Investigator, and reported in a new study published in the journal Earth and Space Science.

Lead author and IMAS PhD student Erica Spain said the seafloor bubbles were detected by sonar and then videoed (Pictured, left) by a towed camera system around the volcanically active islands.

Ms Spain (Pictured, below, on RV Investigator off Heard Island in 2016) said the bubbles may result from two separate mechanisms, submarine volcanic activity and bacterial activity in seafloor sediments.

“As a result of our study, Heard and McDonald Islands have become only the second reported locations in the sub-Antarctic to have active methane seeps,” Ms Spain said.

“Bubbles appear as ’hydroacoustic flares’ on sonar data and we observed hundreds of flares as we mapped the seafloor around the islands.

“Near Heard Island, the bubbles escape from marine sediment and likely consist of methane and other gases produced by buried bacteria.

“Around the McDonald Islands, where marine sediments are thin to absent, elevated 3He, an isotope of helium, indicates gas originating from the mantle, so those bubbles are more likely filled with CO2 and other gases from volcanic activity.”

Ms Spain said the islands are part of a huge submerged seafloor feature, the Kerguelen Plateau, that rises several kilometres above the surrounding seafloor. The islands were completely covered by an ice cap during the last ice age when sea level was ~120 m lower.

“Heard and McDonald Islands and their surrounding seafloor remain at the frontier of scientific exploration, with our voyage acquiring the first multibeam data around them.

“Our work highlights how little we know of the seafloor and how sonar data can give us new insights into the seafloor processes of Earth’s remote places,” she said.