IMAS scientists have conducted research on Centrostephanus and associated barrens along the Tasmanian coast for more than 17 years. The presence of Centrostephanus in Tasmanian waters is a result of warming waters along the East Coast and represents a range extension for this species from mainland Australia. The urchin can have devastating impacts on reefs due to overgrazing which creates expansive urchin barrens. This results in negative impacts on kelp beds and reef dependent species such as abalone, rock lobster and fish.

IMAS conducts research to understand urchin ecology and impacts. This includes surveying urchin populations and barren extent, trials of control measures such as culling and enhanced natural predation (by rock lobsters), and assessment of the wild harvest fishery and increasing profitability of urchin fisheries.

To jump to sections of this page, choose a link below: 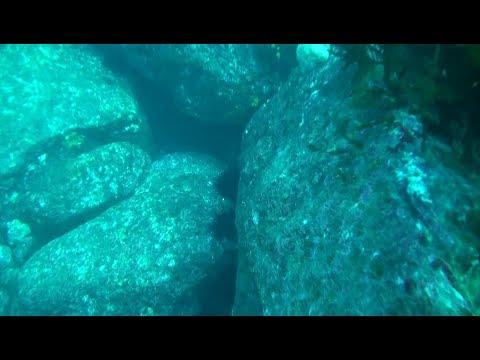 This video features Dr Scott Ling talking about the re-survey of urchins along Tasmania's East Coast.

This animation tells the story of the Long-spined sea urchins and the barrens they've created since they were first found in Tasmanian waters in the 1970s.

Surveying the distribution of urchin barrens The resurvey involved 156 diver transects spanning 13 regions in eastern Tasmania - from Eddystone Point in the north to Recherche Bay in the south. In addition to the dive surveys, 156 towed video surveys, covering approximately 80 kilometres of coastline were  recorded and assessed.

The survey has quantified trends in the Centrostephanus populations across eastern Tasmania, allowing for future trends and region-by-region predictions of overgrazing to be estimated. Furthermore, trajectories for urchin populations on specific reefs that may be approaching the tipping-point of overgrazing can be identified.

The resurvey and assessment of urchin abundance against historical baselines will provide maps of change and an early-warning system of overgrazing to help prioritise tactical prevention (before barrens form). 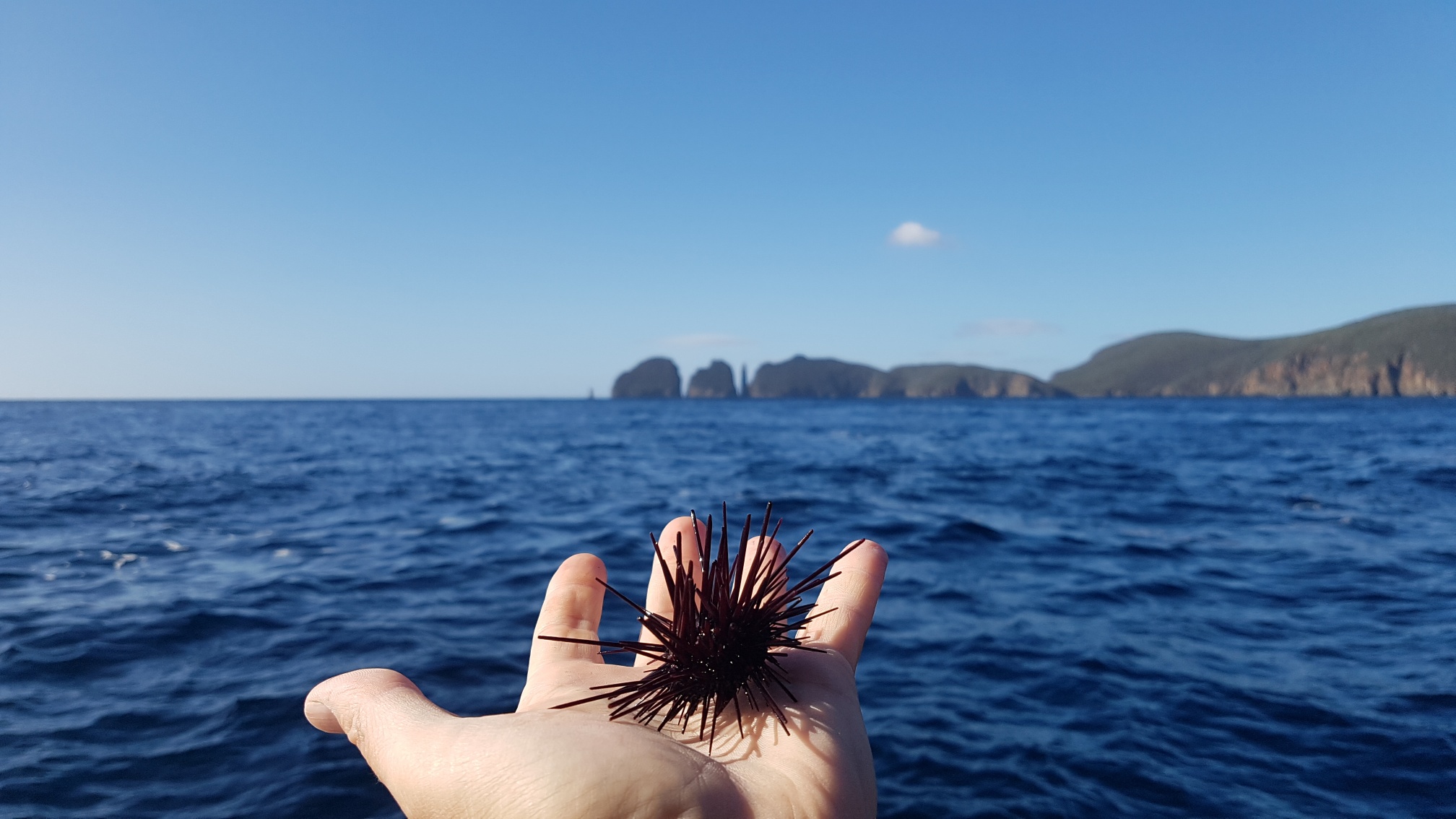 ECOLOGY AND BIOLOGY OF LOBSTERS

More IMAS publications on this research are available here.

Management to reduce the risk of barren formation

Tasmanian abalone industry stakeholders have been working on mitigation options for the Longspined Sea Urchin for many years.

The Tasmanian Abalone Council (TACL) Board determined that the best way to assist the fledgling Longspined Sea Urchin industry was to partially offset the cost of harvesting until such time as the industry 'got on its feet'. The Board's view was that an appropriate harvest subsidy would accelerate the growth of a new export industry for Tasmania, and would reduce the degradation of productive abalone habitat by Longspined Sea Urchins.

The Centro Harvest Subsidy was introduced in late 2016, in an effort to control increasing sea urchin numbers and associated destructive grazing of kelp forests, which are productive abalone habitat. In January 2019, the Abalone Industry Reinvestment Fund (AIRF) took over the administration of the subsidy.

Since the subsidy began in 2016, the total weight of Longspined Sea Urchins harvested under this program is over 750 tonnes (as of August 2019). This amounts to around two million urchins removed from the east coast between Eddystone Point region in the north down to Cape Pillar in the south east. Find out more here.

AIRF supports projects that reduce the Long Spined Sea Urchin population along the east coast, as well as projects that enhance the biological and economic sustainability and productivity of the abalone industry in Tasmania. Visit the AIRF website for more information, industry news, current projects and grant applications.

IMAS found that rock lobster stocks off the east coast of Tasmania were at very low levels for decades and hit historical lows of less than 10% of natural levels in 2011/12. This was caused by catches of both recreational and commercial fisheries. A series of actions occurred beginning with large cuts in catch in 2013. The first step towards stock recovery is to double the stock (to at least 20% of natural levels) by 2023.  Higher targets will need to be pursued after that.

Progress in stock rebuilding is being tracked by IMAS researchers.  Every year the biomass is estimated using a range of data sources including commercial catch rates. The recreational catch is also measured by IMAS. Ensuring the catch remains low as the stock recovers is a growing challenge. Large lobster (> 140 mm CL) biomass is of interest for the East Coast management because they are better able to consume Centrostephanus. Current findings are: In our Tasmanian fishery, lobsters grow at very different rates around the State, and between deep water and inshore areas. In the south, the average growth rate is only around 1mm a year, while in the north it can be as high as 20mm per year.

IMAS research over the last 12 years has shown that moving undersize lobsters from very slow-growing but densely populated deepwater areas in the south-west, to faster-growing more depleted inshore areas on the east coast enhances the overall productivity and biomass of the stock. IMAS determines the specific south-west ‘take sites’ and, with DPIPWE, monitors the translocation process to specific east coast release sites from October to March each year. These are conducted by commercial vessels, with 30,000 undersized lobsters relocated in 2016/17 and 27,000 in 2017/18.

In 2018, the Government committed further funding to translocate approximately 30,000 lobsters each year over the next four years. The release sites in the first year will target areas where urchin barrens are just starting to form, called incipient barrens.

(Image, left: Over the last three years 145,000 lobsters have been translocated to various inshore sites along the east coast of Tasmania. Source: DPIPWE)

The aim is to boost lobster biomass at a very localised level to reduce the risk of urchin density reaching the tipping point where more extensive barren formation may occur.

Adapted from a presentation by Hilary Revill, DPIPWE

Long-spined Sea Urchins are a component of the Commercial Dive Fishery, of which there are 55 licence holders who predominantly fish (by diving) out of small boats (<10 m). Commercial harvest commenced in 2009 and since then catches have fluctuated. A peak of 97 tonnes in 2013/14 was followed by a low of 19 tonnes the following season. Daily catches are typically 500-800 kg/day/diver.

The biggest impediments to an extensive urchin industry in Tasmania was seen as the lack of and viability of processors. In an attempt to enhance and accelerate the commercial Long-spined Sea Urchin harvest, the Tasmanian Abalone Council initiated a harvest subsidy in 2016. This subsequently led to new processors entering the industry and catches increasing to 188 tonnes during the 2017/18 harvest season. IMAS research has shown declines in abundance of Long-spined Sea Urchins, as well as declines in the size and age structure of populations, in areas subjected to high fishing pressure.

Long-spined Sea Urchin processing waste includes urchin test (including spines), jaws and guts, and makes up 71% of the landed biomass, with the dried waste biomass being 33% of the whole urchin weight. Nationally, commercial landings of Long-spined Sea Urchins in the 2010-17 period totalled 1,094 t, resulting in an estimated 777 t of wet weight waste (361 t dried). The highest catch of 188 tonnes from Tasmania in 2018 produced an estimated 132 t of wet waste (61 t dried). IMAS is investigating ways to utilise this waste, including uses as an agricultural fertiliser. Initial results from a growth trial of tomato plants (Solanum lycopersicum) using varying quantities of Longspined Sea Urchin are promising.

Research is focusing on total protein and sulphated polysaccharides, however sea urchin extracts contain many other bioactive molecules including polyphenols, vitamins, minerals and lipids (including Omega-3 fatty acids).

Overall, the in vitro anti-inflammatory and anti-thrombotic activity observed in response to crude and fractionated sea urchin extracts demonstrated the potential of sea urchins as sources of bioactive ingredients that could help alleviate and prevent symptoms associated with inflammatory disorders like arthritis.

Read about this work in progress...

In 2011, IMAS scientists worked with Abalone dive industries to investigate the effectiveness of systematic culling in discrete areas as a strategy to reduce the density of C. rodgersii to minimise the potential for destructive over grazing, and secondly provide an estimate of the cost of culling areas of reef on the east coast of Tasmania.

The program was highly successful with average urchin density reduced from 1.51 to 0.13 urchin per m2 when assessed one year post-culling. The cost of manually controlling (by diver) an invasive species in the marine environment is inherently expensive due to the costs associated with mobilising logistics to a target area, and secondly the limitations of diver time in the water. An option yet to be pursued is free volunteer divers, for example, recreational fishers. 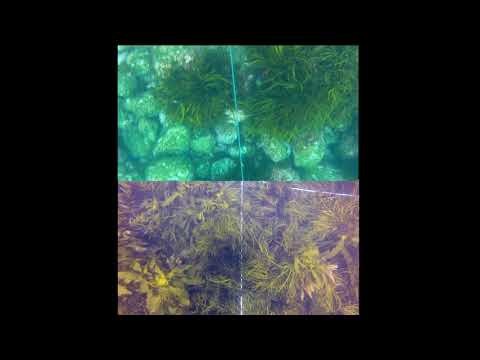 Urchins on barrens are in poor condition and generally unsuitable for harvesting for human consumption.  One solution to this is to harvest the urchins then place them into pens for a short period and feed them pelleted diets until their roe condition improves.  Urchin diets are produced commercially elsewhere in the world and IMAS is doing trials with these in Tasmania.

One of the concepts being explored for clearing urchins from extensive barrens is autonomous underwater vehicles (AUVs).  These vehicles can operate at depths where diving is difficult, moving over reefs, finding urchins and killing them by puncturing the test (the hard, outer skeleton of the urchin).

A prototype has been developed in the US by “Marauder Robotics”.  IMAS will host the team in Tasmania late 2018 and provide field support for trials off our coast.